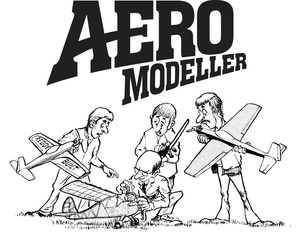 Welcome to the wonderful world of model aircraft flying! If you are just starting or planning to start flying radio controlled aircraft and helicopters you have come to the right place! There is a lot of information on the internet but for a beginner it can get a bit confusing. Learning to fly RC aircraft is not as difficult as one might think. What’s important is that at first you gather as much information as you can.  There is nothing a dedicated RC pilot likes better, than provide guidance to a new member. So your fist step should be to visit our flying site on a Saturday or Sunday. The best time is usually between 9 am and 11 am. Most of the pilots will be there during this time.
During your first field visits it is important to pay close attention to how things work at the field and be familiar with the association rules.  An inexperienced RC pilot CANNOT FLY alone. You need experienced help for your first flights. So it is important to find an instructor who is willing to check that your new model is airworthy and teach you how to fly. Nowadays a great tool to teach you how to fly, are RC simulators. Simulators help build the required eye/hand coordination. Learning how to fly is not as difficult as you might think. What’s important is to have a thorough understanding of how airplanes and helicopters work. Get familiar with the different parts of an aircraft or helicopter and what they do. Lastly make sure you know the physics behind how aircraft and helicopters fly and what each flight control does. 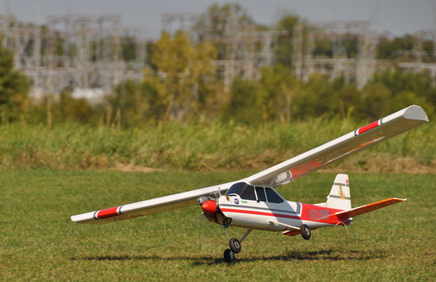 A good first RC Aircraft should be stable, self correcting and forgiving. The best basic design for a trainer aircraft is the high-wing design. A high wing aircraft has its wing situated at the top of the fuselage. Good RC Trainers do not stay put. They tend to regain wings-level flight if given the chance. In addition, a Basic Trainer with a flat-bottom wing usually tries to regain level flight after elevator controls are released. A good RC Trainer can fly at a very slow speed before it reaches its stall speed. The stall speed is the minimum speed at which an aircraft can fly before it simply stops flying and starts dropping like a rock.
Most RC trainers also feature a flat-bottomed wing. On this type of wing, the air going over the wing must travel a farther distance than the air going under the wing. This produces much more lift then a symmetrical wing which has both the top and bottom parts of it the same. More lift allows the aircraft to fly much slower which gives the beginner more time to react. Some trainer aircraft also feature a semi-symmetrical airfoil. These are a step up from the basic trainer and will make the trainer aircraft much more aerobatic. 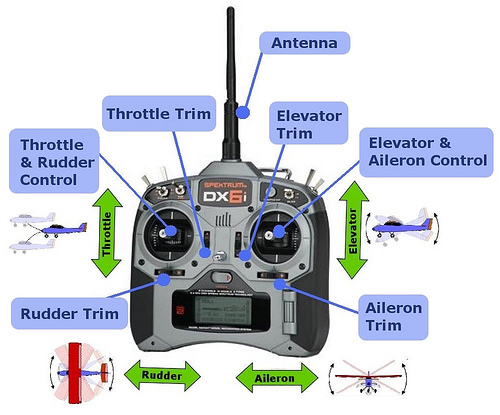 In RC flying we use a transmitter which sends a signal to the receiver inside the aircraft which in turn controls the control surfaces just like a pilot would in a real aircraft. Each function of an aircraft required what we call a “channel”. For example, a typical four channel aircraft will have throttle, ailerons, elevator and rudder control. A transmitter with four or more channels will typically have elevator/aileron on the right stick and throttle/rudder control on the left stick. This is typically referred to as a Mode 2 transmitter. Another configuration transmitter also exists called a Mode 1. With Mode 1, the right stick controls the ailerons and the throttle. The left stick controls the rudder and elevator. The throttle stick is the only stick that does spring back to neutral position when letting go of the sticks. Most transmitters have the function of being connected to another transmitter via a lead. We call this a buddy box. A buddy box is a training system where you use a transmitter that is plugged into the instructor’s transmitter. The instructor can override you and take control of the aircraft at any time. Its a great way to learn how to fly as it minimizes the chances of a crash.
Most modern transmitters nowadays transmit signals over the 2.4 Ghz frequency. This type of signal transmission uses coded and hopping frequency signals so as to avoid interference from other transmitters in the area.  Some flyers still use the “old” 35 Mhz frequency for transmission. Since this system is not coded, if there are several pilots using the same frequency (channel), only one may fly at any one time. If someone turn on a transmitter that operates on the same channel as does an aircraft that is airborne, there is a good chance that the airborne aircraft will crash!

Accessories required at the field

Whether flying nitro engine powered models or electric models there are some basic accessories which one would need to get started. The equipment that you take along with you when you go flying are commonly referred to as field equipment. Here is what is mainly needed:​

All of the above is only a small introduction. Before going out and starting to purchase stuff, take the time to familiarize yourself a little bit with the hobby. The internet and online forums are a great source of information. Do your research well before buying anything.​
We hope to see you at Ta Qali! Happy landings!!